In manufacturing, even small technical problems can mean hundreds of thousands of dollars lost annual revenue. That was the case for our customer, a food manufacturing facility in the Midwest. Their problems with hot melt adhesives were causing excessive downtime, required additional resources, and caused damage to their reputation. With our help, they were eventually able to eliminate their hot melt problems entirely.

The company we’re talking about is a manufacturer for a beloved American canned food brand. They were using hot melt adhesives to seal cases in their manufacturing plant and were constantly dealing with pop-opens.

These pop-opens led to significant downtime when filters and nozzles would clog. They needed dedicated personnel to the end of their lines pulling cases and sealing them up with glue guns.

Even with this added quality check at the end of their lines, they were still having cases fail during transport. This led to expensive returned shipments and caused damage to their relationships.

Thinking they might need a new packaging hot melt, they contacted us at Hotmelt.com. Since we love a good hot melt mystery, we got right to work.

Finding the Root of the Problem

We all know you can’t fix a problem until you find the root cause. Cases were popping open, but what was causing this?

The company suspected their hot melt system needed an upgrade or perhaps they needed to change to a different packaging hot melt. These two things were definitely a consideration, but they probably weren’t the root cause. After doing some digging, we found a few likely causes.

The first thing we noticed was the storage of the pellets. They were stored in large plastic containers with no lids, and they would sit uncovered between batches.

There was a lot of airborne dust and debris in the facility. A large amount of dust from the cardboard itself was settling in the containers on top of the pellets.

This dust was a major source of contamination. As the pellets were poured into the glue tanks, the dust that had accumulated ended up in the tank, resulting in additional charring.

Hot melt tanks have a specific setting that should be used between running batches. It’s called a “standby” setting and it uses a low temperature setting to make sure the hot melt doesn’t burn.

We found that this facility was leaving the systems on full temperature while lines were idle, causing excessive heat and ultimately more charring inside the tank.

A little maintenance today can save a ton of money tomorrow. In this case, there wasn’t a strong maintenance schedule for the hot melt system. There were instances where the line would go an extended period without routine maintenance.

After the root causes were determined, it was time to roll out some changes. We had two phases that we suggested to the plant: immediate and long-term solutions.

One major fix was filters. Until the char issues were resolved, the operators agreed to strictly a regular replacement schedule for filters to proactively prevent clogging. We connected them with a source for inexpensive replacement filters, which ended up being less expensive overall even when they would be replacing the filters three times as often.

Two months after rolling out these short-term solutions, the plant was seeing amazing results. The plant manager estimated that they were seeing a 90% reduction in pop-opens. All without spending an extra dime.

Very happy with the results so far, and hoping to completely eliminate pop-opens from their lines, the plant manager asked us about their adhesive or equipment options. Although their hot melt system wasn’t the most modern, we felt a replacement wasn’t necessary. It would be too expensive and time-consuming for the company.

What we recommended they test instead, as a trial on one of their lines, was a combination of a new self-cleaning applicator and a cleaner running hot melt adhesive. This was a relatively low-cost solution that we had seen run extremely well with other companies’ hot melt systems.

After four weeks of this trial, the plant manager reported back. He said that once they replaced their hoses (where char builds up most), cleaned their tanks, and got the temperature dialed in correctly, they were seeing zero pop-opens on this upgraded line.

Eventually, the plant upgraded all of their lines to this new combination. They no longer need anyone at the end of the line sealing up pop-opens. And the plant manager no longer has to worry about cases popping open in the hands of customers.

If you’re looking for help with your packaging hot melt, you can always reach out to us at Hotmelt.com.

We've helped countless manufacturers troubleshoot pop-opens, and would love to help save you some money and spare you some headaches.

For tips on eliminating your hot melt pop-opens, download our printable guide. 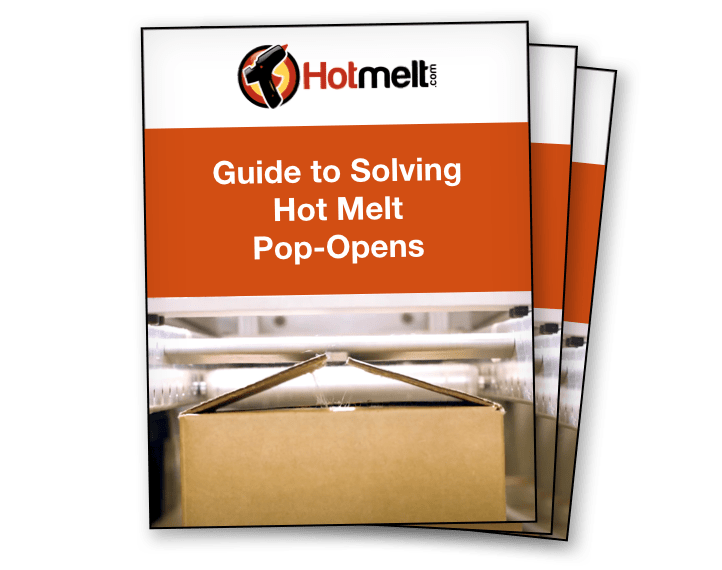 Download our free printable guide to identify and fix the hot melt problems causing your pop-opens.

This guide will help you:

Eliminate Your Pop Opens For Good

Download our free printable guide to identify and fix the hot melt problems causing your pop-opens.